Best Toy trains and train-sets for kids. A toy train has a place in every child’s heart, as kids love to travel by train and also watch them pass by. When it comes to toy trains, kids love to push them around, and watch them while in motion as they make the choo-choo sound.

Trains have always fascinated kids from a very young age, and a toy train allows even the youngest train drivers to go on a new railway adventure.

A toy train is a toy that represents a train, although unlike a model train where the focus is on scale modeling, a toy train has more focus on keeping costs reasonable, durability, and incorporating some educational element.

A toy train can be as simple pull toy that does not even need a track, or it can be operated using a battery.

The more elaborate toy railway sets include fun track layouts, crossings and tunnels. You can combine the trains and train sets in endless ways, you can take the train to the countryside, the coast, on safari, or anywhere where your imagination takes you.

Types of Trains for Kids

You get ride-on toy trains for kids that are fun to use, many of them come with their own tracks; these can be driven on normal surfaces as well. Best ride on (riding) trains for toddlers and growing kids

These are quite popular with kids. Companies like Fisher-price and Brio make all kinds of toy trains. If your little one is under 5, these are great fun and requires very little effort on your part. 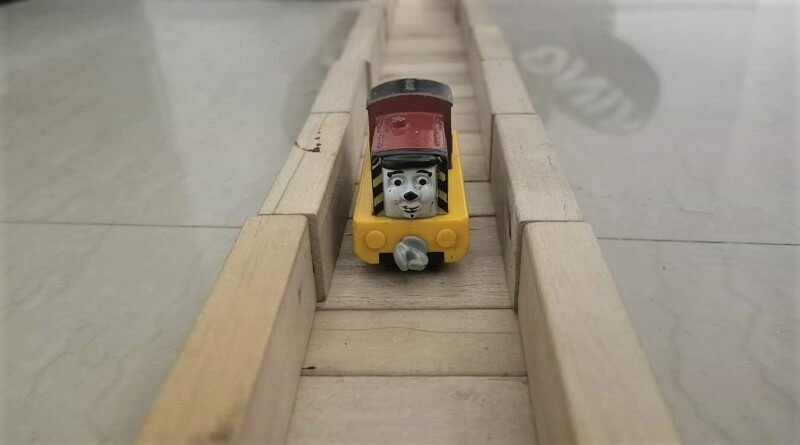 Diecast trains, such as The Thomas the Tank Engine are very popular with kids. These are miniature metal trains painted in bright colors to attract kids. These can be used by kids aged 5 and up. The only downside is that these are available in various designs and your little one might force you to buy all of them.

Battery-operated trains are a good choice for kids who are not yet ready to handle electric trains. These consist of a locomotive (powered by batteries), cars, and a plastic track. These are inexpensive and suited for kids aged 4 and above.

In case your child already has a train toy and is perhaps bored of playing with it, these cool accessories should help.

The good thing is that you get a wide range of accessories and expansion packs for trains, such as cranes, bridges, exciting stations, extended railway tracks, that will provide the much needed extension or makeover to your toy train and motivate you kids to start playing with it again.

A train is a form of rail transport consisting of a series of carriages pushed along a rail track to transport passengers or goods. The locomotive or engine in the front powers or pulls the coaches and is powered by diesel or electricity. The train tracks usually consist of two rails on which the train chugs forward.

Parts of a train

LOCOMOTIVE – is a type of an engine which generates energy through the burning of fuel (coal or diesel) or electricity. They are used to push or pull train coaches or wagons, both passenger and freight. The first locomotive was invented-by George Stephenson in early 1800.

PASSENGER CAR – is a piece of rolling stock that is designed to carry passengers. The rolling stock may have a chair car, pantry, dining hall.

GOODS OR FREIGHT WAGONS – are unpowered carriages that are used for the transportation of cargo. Today a variety of wagon types are in use to handle different types of goods.

CABOOSE – At the very end of the goods train is attached a coach called Caboose! It is used to keep a check on the long goods train. A passenger train is one which includes passenger-carrying coaches which can often be very long, while a freight train (also known as goods train) uses freight cars (also known as wagons or trucks) to transport goods or materials (cargo) with a caboose attached at the very end of a train.

Metros are railways that provide a useful alternative to traveling by road in crowded cities. Powered by electricity, Metros are fast but stop frequently because the stations are at a closer distance. While most metros have drivers, some metro trains have no drivers and are operated by computers from a central computer room. Metros travel both underground and on raised tracks above the streets.

A tram is a carriage for public transportation powered by electricity and designed to run on rails located in the street. Trams provide several advantages over buses as they move smoothly through traffic and are less polluting than buses.

A monorail is a public transportation system that runs on a single track raised by a beam. The monorail was developed to meet medium-demand traffic in cities.

High-speed trains, such as the bullet-trains have a maximum speed of around 350 km per hour.

Piko model trains (MAde in Germany)

How to sell toy trains While not the most sophisticated, the Stinky Pig Game is extremely popular. Here’s how to play the game. Checkout the bestselling toys and games on Amazon Why is the Stinky Pig Game so Popular? I think the simple reason for the huge popularity of this game is that it is very simple t play, and […] These bouncy balls will have kids jumping around with joy, and are also great for kidults to release stress. Checkout the bestselling toys and games on Amazon Brightly-colored, bouncy balls are a common sight in the toy collection of most kids. Kids love to play with these balls, and are quite captivated by their colors […] Named “kidults” by the toy industry, more adults are buying toys and games for themselves in order to destress, and to have fun. Checkout the bestselling toys and games on Amazon Toys for Kidults The pandemic made many adults realize that at times taking care of oneself is as simple as reliving their childhood. And […]